Hero of the Day: Mr. Frank 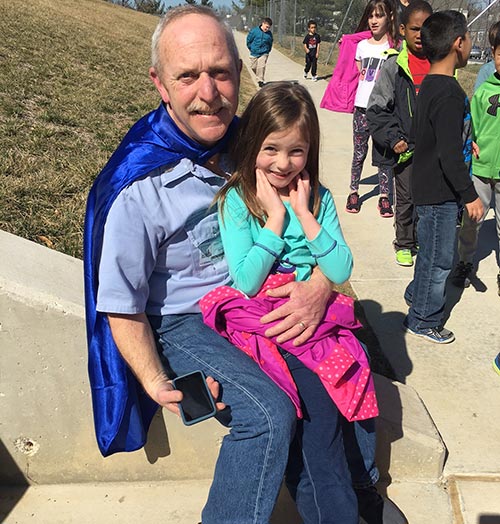 by Joel Santhosh
Mr. Frank was the Hero Of The Day in Deep Run Elementary School! He came because his granddaughter is here and he enjoys meeting new people. His favorite part of being  the Hero Of The Day is to meet new people! He was a firefighter and likes children especially when they came to the fire department everyday. He describes the working atmosphere at Deep Run as a, “hard working school!” His advice for other Heroes of the Day is “to come here and have fun.” This is the interview we did for Mr.Frank!

by Pannha Mao
Mr. Frank was here on February 23, 2017. We interviewed him and this is his response. He said that the next Hero Of The Day had to have a good attitude and to have a great time at the school to be The Hero Of The Day. He came to the school because of his grand daughter, “Juliana.” He loves meeting the kids here too! He found out about the Hero Of the Day program from his daughter. He did these kind of things before when he was a firemen and kids would come to his fire station. When he is not the Hero of the Day, he does house work or goes to the gym. His opinion of the school is that it’s very beautiful and there are really nice people in the school.

by Stephanie Aceves
Mr. Frank was our  Hero Of The Day.  We asked him a few questions that day.  The first question we asked him was “What skills or talents are helpful if you want to be the Hero Of The Day?” He said you need to “have a good attitude, and be good for school.”  The next question we asked was “What motivated you to be a Deep Run Hero of the Day?” He said, “his granddaughter was here and he enjoys being with his her.”  The last question I read was, “what is your favorite part of being Hero of the Day?” He answered “I like meeting new kids!” That is all our questions and our answers from Mr. Frank.

Hero of the Day